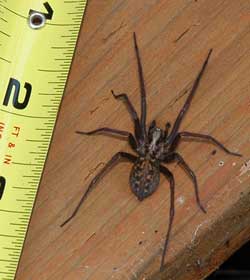 There was a shriek from the bathroom this morning. The little lady had discovered a ‘tarantula’ in the bath. “It’s that big” she says, holding hands out that would easily encirle a dustbin lid (the old-fashioned corrugated type, not a wheely bin). The offending creature was, in fact, about an inch wide.

Anyway, I ejected the helpless thing out of the bathroom window onto the conservatory roof – it’s probably climbed back into the bathroom by now – and I got thinking. Why can’t spiders get out of the bath when they can easily walk upside-down on ceilings?

And also, after almost bringing down the house walls by the power of their screams, why do girls suddenly get all protective of the spider’s welfare? Stuff like “don’t trap its legs” or “don’t drop it too far”. Why are you bothered?

I once had a girlfriend who was petrified of spiders, but when she saw one stuck in the bath she used to make a ‘spider ladder’ – a strip of bog roll draped over the side of the bath – so that it could climb out itself. What’s all that about? Women!