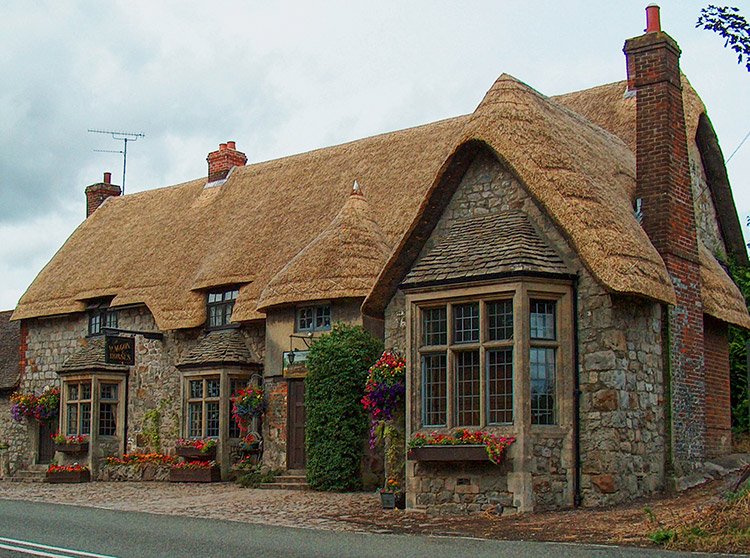 The second of my archive ramblings from Newark CAMRA’s newsletter is from July 2003.

After several weeks of unseasonably warm weather, it was finally time for our planned long weekend trip south to Poole. No surprise, then that the weather broke the day I drove down to Wiltshire, raining torrentially for almost two days without stopping. Never mind, most of my holiday was spent in pubs, so it didn’t really matter!

The first stop was to break the journey and I chose a pub from the 2003 Good Beer Guide, the Earl of Normanton in Idmiston, Wiltshire, situated about three miles away from Stonehenge.

This was a marvellous country pub with a raised-terrace drinking area at the rear of the pub with excellent panoramic views of the surrounding Wiltshire countryside. Alas, it wasn’t much use this wet July evening, except for a few pigeons and care-free sheep. Instead, we chose to sit inside the large horseshoe-shaped bar and sample the beers.

Although a free house, the pub had a tie-in with Cheriton brewery and beers on offer were Cheriton Pots Ale, Village Elder and Best Bitter. Also on was Hopback Summer Lightning. I tried them all, and although they were all in excellent condition, the Village Elder stood head and shoulders above the rest and I settled on that for the rest of the evening.

After six pints and a very good home-cooked supper, we retired to our B&B which was a recently converted barn across the courtyard from the pub. Thanks to the half-dozen I’d consumed, I slept soundly and didn’t hear the intruder trying to get in, who was consequently chased away by the landlord at 3 a.m.

I  did, however, hear our early-morning call, which took the novel form of a car leaving the bend and smashing into a wall about six inches away from our chalet and two feet away from the rear of our parked car! Over breakfast I was assured that not all guests receive this special treatment!

Friday morning we continued on to Poole, our B&B situated on the road, about central to our planned pub crawl and only ten minutes walk from the town centre. Some more sightseeing took up the afternoon, and then on with the all-important bit, exploring the pubs. The 2003 GBG lists eight, plus an Inn Brief, and I intended to do them all, bar the one out-of-town.

Friday evening we walked down to the quayside and found a charming little boozer, the Poole Arms. Cosy and one-roomed, its narrow frontage is completely covered in green tiles. Although it wasn’t GBG listed, I couldn’t pass it without going in, and was rewarded with an excellent pint of Ringwoods Best, which was enjoyed sitting outside on the quayside, people-watching for half-an-hour.

Apparently, the pub is up for sale and the owners want to be very careful who they sell it to, lest it falls into the hands of someone who doesn’t care about pub tradition and turns it into less than it deserves. It is only too easy to see how this could happen along this trendy stretch of the waterfront. Let’s hope they get the right buyers.

The next three pubs were all in the GBG. First the Blue Boar. This pub is split into two levels the Lounge Bar and the Cellar Bar. We chose the latter. The cellar bar was very reminiscent of the (now sadly closed) Cornhill Vaults in Lincoln. The walls were covered with nautical items and relics from the now demolished Poole Power Station. Here, I chose a pint of Cottage Southern Bitter, again very good condition. There was a band set up for live entertainment, but we left before they came on.

One thing that I had never seen before was that the necks of the beer engines were extended above the bar, allowing the glass to sit on the bar under the nozzle and beer dispensed into it. This was of course possible because the beers were not served with a sparkler and therefore didn’t have the unnecessary one inch of unwanted froth on the top.

It is also worth pointing out that beers served in this way (usually) don’t need topping up. Indeed, we went all holiday without seeing any beer wasted over the side of the glass, or having to ask for a top-up. Lined glasses? Certainly not around here. Nor are they needed!

Next up, the Royal Oak and Gas Tavern. Situated on a back street, just three or four minutes from the Boar, the Gas Tavern was my favourite pub of the whole weekend. No frills, no gimmicks, just a great, unspoilt, welcoming local serving another great pint of Ringwood’s Best.

Final call of the evening was back around the corner, onto the Old High Street, and into the Brewhouse. Until recently this was the site of the Poole Brewery, which I was told has relocated. Another no-frills pub, probably catering for the younger drinker, with TV, two pool tables and loud music. Strangely, in comparison to the Gas Tavern, which was heaving with customers, the Brewhouse was pretty quiet. A good selection of beers, though, from which I chose Mermaid, and though I can’t remember who brewed it, I can still taste it! Great stuff. Then it was back to base via the Tandoori Nights curry house.

Saturday morning – no let-up in the rain, and another five GBG pubs to fit in. After a good full English, we started the long walk up Parkstone, onto the Bournemouth Road, and reached the Branskome Railway Hotel at just gone noon.

The frontage of the Branskome is magnificent and inviting, with its strong Victorian architecture adorned by blossoming hanging-baskets. Alas, step into the bar and you stand in a dingy, smoky, run-down, establishment that is not at all welcoming or enticing. Sticky-topped, rickety old tables, ripped upholstery with its stuffing spilling out, tobacco-stained walls that haven’t been painted for years, and the wall behind some furniture or something that’s been pulled out that hasn’t been painted at all!

Add to this a very dodgy pint of Hampshire Brewery Strongs Bitter, and I can’t think of one reason to return there. Shame, because this has the potential to be a great establishment.

Next, back up towards the Ashley Road to the Hogshead. Nothing exciting here. The usual Hogshead layout, décor and standard beer range. I settled for an OK pint of Boddingtons and waited for the rain to abate, with no luck.

Back out into the rain, reversing the way we came and we found three GBG pubs, quite literally within (if you are very good at it) spitting distance of each other. The Bermuda Triangle is situated perhaps a hundred yards from the main road, but could have been in the middle of a village. A pub of real character with little snugs and annexes. The walls and ceiling are decorated with maps, news cuttings and memorabilia of the Bermuda Triangle, including part of an aircraft wing. Four constantly-changing beers are available here.

I asked for Wye Valley Dorothy Goodbody Summertime Ale. It was in good condition, but slightly warm, perhaps because there weren’t many drinkers in and I had the first one out. But you could tell that this is a serious drinkers pub, and I would like to go back when its busier. A strange thing; As I left the Bermuda, I turned to take a snap of it. When looking at the photo later on my PC, a ghostly grey shape could be made out in the left upstairs window. Spooky, eh?

Directly opposite is the Bricklayers Arms, our next port of call. Another basic pub, lacking any real character, but serving a fine pint of Ringwoods Best. Ringwoods seem to have a good foothold in this area, the brewery being situated at just over the Hampshire border in nearby, er, Ringwood. Fortunately they produce a good range of traditional beers.

Out of the Bricklayers, turn left, back past the Bermuda, and the Central is located on the corner to Commercial Road. The Central is Hall & Woodhouse owned, another large traditional boozer. A fine interior with large potted plants, spectacular marble fireplace, brass fittings, etched windows and grand curtains. My pint of Badger was OK, but nothing to write home about. Very nice surroundings, though.

And that was it! Id cracked my list of GBG pubs, and it was only about five o’clock. But this little chappie wasn’t ready to retire yet. Oh, no! We took in four more pubs – the Britannia: a plastic pub serving an average pint of Ringwood Best; In and out of the Conjurer’s Half Crown (no real ale); A good pint of Tetley in the Shah of Persia and finishing up at The George. A large, bustling town centre pub serving a good drop of Hampshire Romsey Bitter.

Poole, especially the old town, has some great pubs and is well worth a visit. In fact, considering the proximity of Bournemouth, it might be worth taking in both towns next time.