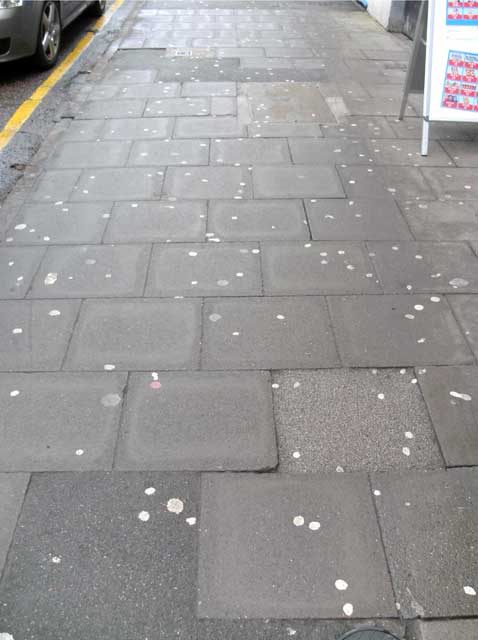 Chewing gum. What a foul-arsed habit that is! Look around your town. It’s on the pavements everywhere. What makes the inconsiderate fuckwits who use this stuff think it’s OK to gob it out onto the pavement and leave it where it lands? Never heard of dustbins, shit-for-brains?

The photo here was taken on a side street in my town. Not even a main road and it’s all over the place.

Now I realise Wrigley’s aren’t the only ones that make this crap, but as they’re the best known, I’m going to pick on them. I’ve just had a look at their web site and it’s trying to promote this shit on health grounds! To quote their web site, they have:

…conducted research related to the benefits of chewing gum in the areas of:

What a load of fat old bollocks. Here’s some news. I’ve done my own research and my findings are that chewing gum:

There. I think that’s a bit nearer the truth.

Something needs to be done about this. Councils (and ultimately that means you and I) are paying hundreds of thousands of pounds every year cleaning this shite off pavements. And it’s not working. They clear it off, it comes back. No, let’s tax the shit off the face of the planet. Never mind taxing the fuck out of responsible drinkers like me, make chewing gum a fiver a packet. And then pass the money on to councils for the cleanup. Ain’t gonna happen though.

We could have ‘Gum Police’ on every street corner. But that would be just plain daft, because you never actually see anyone gobbing it out, do you? Nice idea though. Then, if they actually caught somebody, they should be given the power to make the offender chip every sodding piece of dried gum off a street using just a packet of toothpicks, whilst wearing a dayglo jacket with ‘Kick me soundly up the arse’ on the back.