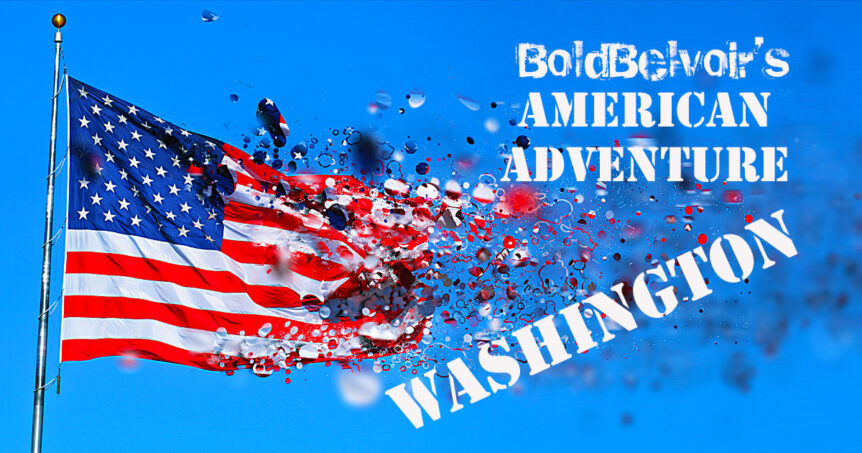 After getting the obligatory eggy breakfast, we boarded a Greyhound bus at 10 o’clock bound for Washington. We were scheduled to cover the 200 miles or so in just over four hours. Sho nuff, we arrived at Washington Union Station – another fine piece of architecture – at just gone 14.00. We grabbed a cab to take us to our hotel, which was over eight miles away. After a quick freshen up and another cab, we were dropped off at the National Mall back in town and standing on Jefferson Drive in front of the Whitehouse for a selfie opportunity by 17.30.

It had been hot today – about 36 °C – and the gentle evening breeze was welcome. After having a quick nosey around and getting the lie of the land, we decided it was beer time. Capitol City Brewing – 1100 New York Ave NW #710W, Washington, DC 20005, was about 25 minutes’ walk away.

Capitol City was a large, modern bar situated on a busy street corner and looked about as American and commercial as you can get, devoid of any real character. But we wanted a beer and some much-needed sustenance, so we decided to stay for just the one. As feared, the 6.6% Cap City IPA I ordered was nowt to shout about and after we finished the food we swiftly moved on.

A 20-minute walk brought us to ChurchKey – 1337 14th St NW, Washington, DC 20005. When we found the place, it looked like a fine dining and wine venue and actually walked out. When we doubled-checked the address, we asked one of the waiters who directed us out the door and up some steep wooden steps which led to their craft beer bar. It turned out to be a hidden gem. A single long and deep room with drinking area to one side and bar along the other, sporting no less than 48 taps, plus five hand pumps.

There was a printed beer menu here, so I suspect that most of the beers were permanent offerings. Nevertheless, it was a pretty decent selection. I chose six from the list: Peeper, a 5.5% IPA from Maine, On the Wings of Armageddon, a 9.2% DIPA from DC Brau, an 8% Double NEIPA Hollow Horse from Bluejacket,  Kodachrome Dream(ing), a 4.5% Radler (I didn’t realise when I ordered it!) from Right Proper, a Hoof RARted 9% DIPA from RAR and one of the cask choices, the 5.9% Ghost IPA DDH+Grape from 3 Stars. It was the first cask I’d tried since arriving in the States, and this one was a belter! It was nice in here, but the air conditioning was making Mrs. Belvoir cold, so we felt obliged to move on after a couple of hours.

Next on our list was the Bier Baron Tavern, but when we got there it was just closing, being a Sunday an’ all, so we went in search for another place. Unfortunately, in spite of being keen rambler, Tracey managed to stumble on an uneven paving stone and fell over (nothing to do with the beer, honest) and ripped off the end of her big toe. Ouch! Luckily there was a pharmacy on the other side of the road, where we went to buy some first aid supplies. On inspection though, it was evident that the wound would need more than a plaster, so we asked a police officer who was parked up in his car where the nearest A&E was.

Being a Sergeant in the British Police Force herself at the time, Tracey quickly struck up a conversation with the officer, and within minutes there was an ambulance in attendance for some curb-side treatment. It could only happen to Tracey. Amazing! By the time all the excitement was over, it was time to call it a day and we got another cab for the twelve-mile ride back to the hotel.

In the light of morning, it became apparent how bad Tracey’s wound was and it was obvious a lot of walking was not practical today. So it was decided that her and Scary would split from the Belvoirs today and we would do our own things. A cab dropped us all off back at the National Mall where we arranged to meet up again later that day. Tracey and Chris decided to do an open-top bus and water tour, whilst Mrs. Belvoir and I decided to start with the nearby Smithsonian Institute tour. This place is split up into several sections along the length of the Mall and is so extensive you could spend all week exploring. We decided to do the National Museum of American History.

This alone is a massive place, and I’m sure we only saw a fraction of it, but to be honest, after an hour we’d seen enough. So back out into the sun and along the Mall away from the Capitol Building and past the Washington Monument (which, unfortunately, was closed due to refurb) toward the World War II Memorial, where we stopped for a few minutes to pay respects and take on some water. It was baking hot here today, about 38 °C, and there was absolutely no shelter around. We walked the length of the reflecting pool and eventually reached the Lincoln Memorial. By the time I had climbed the steps, I was that hot I thought I was going to pass out! Still, we got our obligatory selfie.

After a bit of a sit down in the shade we recommenced our walk, jinking right behind Lincoln’s statue and continuing adjacent to the Potomac River, and through the Georgetown Waterfront Park. There was some lovely green space here and I bet the real estate prices were at a premium. Our intended destination was actually the steps that featured in the 1973 film, The Exorcist. After much searching and asking three locals (the first two didn’t know!), we found the steps at the intersection of M Street NW, Canal Rd NW, and Whitehurst Freeway NW and boy, are they steep! When we got there, a lady was jogging up and down the flight for fun. Every time she completed a cycle, she put a pebble on a window sill at the bottom. We counted 21 stones and she was still going strong! Just watching her was making me feel thirsty, so I decided I needed beer!

The Tombs – 1226 36th St NW, Washington, DC 20007, an aptly-named cellar bar, was close by and the air conditioning was a welcome relief from the heat outside. For a Monday lunchtime in a hidden underground bar, it was pretty busy in here. Despite this obviously being a foody place with only a limited beer choice, we settled on some stools at the bar and perused the menu. I opted for a 5.2% Vienna Lager by Devils Backbone, which was bog-standard and sickly sweet (as expected, being an Anheuser-Busch sub), accompanied by a plate of hot wings (which were very nice). Nice bar, shame about the peeve. No matter, it was a welcome oasis in a time of need. Time now to start the walk back to meet our travel pals.

We caught up with Scary and Tracey at Stoney’s on L – 2101 L St NW Suite #103, Washington, DC 20037, another smallish modern bar, this time with 24 beers on tap. I had a 4.4% Blood Orange Gose by Atlas, which was very acceptable and a perfect quencher in this weather. We were getting a bit peckish by this time so it was off for some din-dins.

A two-mile hike took us to the Right Proper Brewing Company – 624 T St NW, Washington, DC 20001. We found space on one of the benches on the street outside and got a tray full of beers, which we sipped while we waited for our food to arrive. Some proper good beers here: Ravaged by Wolves – a 6.5% Brett, New Weird America – 5% APA, Humulus Lycanthropus 6% APA, Eno – 5.1% Saison and a Vintage New Weird America 5% APA, all brewed on-site. Suitably fed and watered, we ordered an Uber to take us to our final stop of the day, back to the Bier Baron to make good on our aborted visit from last night!

The DC Comedy Loft and Bier Baron Tavern – 1523 22nd St NW, Washington, DC 20037, to give its full name is, as you may have guessed, a bar with a resident comedy club. Or is it a comedy club with a bar? Either way, a fantastic setup with almost daily comedy performances in a separate area from the bar by amateurs and professionals alike. Tonight there was a ‘comedy school’ where new hopefuls took a five-minute spot on stage overseen by a professional comic, who would interrupt the routine to comment on their technique in order to improve their material and/or delivery. It was fascinating to watch and we sat there sipping a beer for half an hour or so before we returned to the bar area for some serious drinking.

Great selection in here, and tonight it was sours all the way! 6.4% Queen of the Seven Kingdoms from Ommegang, 8% Crimson Tart from Uinta, 5.2% Mr Kiwi from Highway Manor, 5% ChiChi 5% from Denizens, and finally a 2015 sharing bottle of 10.3% Tangerine Dream from the mighty Cascade, which was about $35 but worth every penny. We had a great session here and were the last ones to leave at gone 11 o’clock when the Uber arrived to take us home.

And that was the end of our stay in D.C. I was aware that in two days we didn’t really see much of it and I know the city has had its troubles in the recent past, but I liked what we’d seen and done and would definitely go back. Next stop – Philadelphia.